“You let the whelp steal your, no our, chance for retribution.”
“I don’t remember any instance where you or your kin were harmed by the pitiful gnome.” Wilgar replied, the words sounding as stones grinding as he gritted his teeth.
“There were trolls that fell to the fires at the gates of Pendar, those were my brothers at arms.” Armagh shot back.
“Untold numbers of dwarves died that day, the boy’s own father, all by the designs of Orgle”
“Since when do rock trolls worry about the lives of those that would mine the ore and precious metals from the mountains.?” Armagh pressed.
“The day will come General, when the dwarves of Pendar grow strong again in their mountain homes, and you will wish that they would lend to you their might and dwarven blades.” Wilgar stated.
“Leave the fighting to me and my troops Priest, if that day ever comes it will be as a last resort that I go to the dwarves to ask for help.” Armagh said as he turned and left Wilgar standing alone in the temple.
Wilgar shook his head as he watched as the general walked away. There was a storm coming, the stones had showed him as much, though Armagh would never listen to him. The best he could hope for was for the general would change his mind when the time came.


When the fate of all of Dulin hung in the balance…. 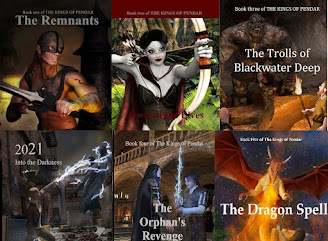